The Iron Range Maidens competed in the 3rd annual Rumble in the Valley Roller Derby Tournament on May 9-10 in Grand Forks, North Dakota. There were a variety of challenging teams in attendance from Winnipeg to Minneapolis. Eight teams participated, and the Maidens placed 4th.

The Maidens’ first bout at the tournament was against A-town from Aberdeen, SD. It was a close bout, but we took the win. A-Town is scheduled to come to Coleraine on August 29th for our second home bout of the season. Come see if the Maidens can win again! 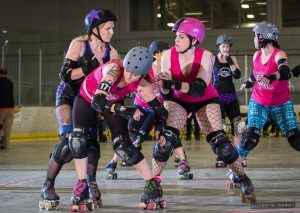 Bemidji’s Babe City Rollers also attended the tournament. The Maiden’s defeated Babe City in Bemidji back in March. But at the tournament, the Babes were able to pull out the win against us, and ultimately placed first overall. Our home opener on May 30th in Coleraine will determine the season tie breaker.

The tournament offered many learning opportunities for the Maidens. We are now focused on preparing for our first home bout of the season on May 30th. We hope to show off all we’ve learned against the Babes at the Hodgins-Berardo Arena. The doors will open at 5:30pm and the first whistle is at 6pm. Tickets are $5 per person; ages 5 and under are free. Don’t miss out on the fastest growing women’s sport in the world! 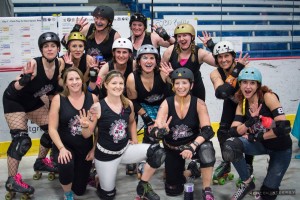